WE ARE HERE (PART 2) AND WE STILL LOVE HILLARY 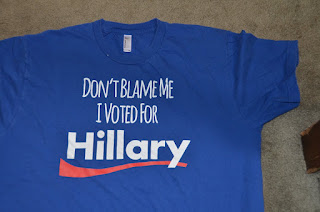 Last week I got to work the Hillary Clinton signing at the bookstore where I work (yes, I begged for the opportunity, you may have noticed I’m a bit of a fangirl woman).

I worked the book table (meaning after people went through the line to meet her, we had signed books waiting for pick up) and as I watched and talked with the people coming out, I got angrier and angrier.

Why?  Because of mainstream media’s ENDLESS insistence that Hillary didn’t ‘click with voters’ or ‘didn’t inspire passion/enthusiasm’ (or UPDATE: There wasn’t ‘joy’ in her campaign, sigh, time to STFU Joe Biden)

Let me tell you what I saw.   I saw well over a thousand people (there would have been more, but it was a ticketed event and it sold out in 30 minutes after going on-line).  I saw children, women, men, and gender queer people wearing Hillary shirts, buttons, stickers and in a couple of cases, jumpsuits made of fabric with Hillary faces all over them.

I saw people shaking in excitement as they waited in line, people in tears before meeting her, while meeting her, after meeting her.  People bringing their daughters and telling Secretary Clinton how much she meant to them, especially as parents of girls.

I listened to the African American man outside singing (beautifully), My Girl, but changing the words to My President.

So, what did I see?  I saw passion, I saw enthusiasm, I saw LOVE.

Who did I see it from? (not just at this event, but in my life and on social media) I see (saw) that the love, adoration and respect for Hillary comes mainly from People of Color, Women, the Differently Abled, the LGBTQIA community etc. AKA  The Overlooked/Ignored/Condescended to/Denigrated Communities.

Hillary Clinton and her run for the presidency means so much to so very many.  Her struggles as a woman in a man’s world (and yes, that’s how it’s treated.  Look at the passes given to Trump and Sanders – while Clinton was under a microscope for EVERYTHING).

99.99% of us who voted for Clinton will not run for president, but I would say 99.99% of us can relate to being cut down, ignored, patronized, in addition to having to do everything in ‘high heels and backwards’ to be given 1/10th of the credit that white cis heterosexual men get.

Hillary Clinton walks the walk and those of us who spend our lives dealing with bullpucky know what the real deal looks like.

So, let’s be clear Mainstream Media,  HILLARY INSPIRES JOY, ENTHUSIASM, LOYALTY, AND LOVE. (and you can quote me on that)

P.S. Did I get a Hillary moment?  YES! She came in the door where I was working and when she spotted my t-shirt (photo above), she gave me that beautiful wide eyed grin and said “I LOVE your t-shirt!” I told her that I loved her (I do) and we had a lovely, warm two handed handshake as I thanked her for everything she has done.