Review: BREAKTHROUGH (aka Another Children's Book That Made Me Smarter) 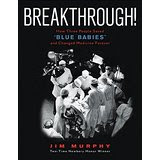 Recently I picked up the book Breakthrough by Jim Murphy (Clarion Books, 2015) http://www.indiebound.org/book/9780547821832 The subtitle is: How Three People Saved "Blue Babies" and Changed Medicine Forever

Now, I am not a major science reader, I leave that to the spousal unit.  I read some of The Immortal Life of Henrietta Lacks but I mainly got my information from her Fresh Air interview and talking to others who read the book.  It's a fascinating story and very well written, it's a case of "It's not you, it's me." I'm not a big reader of really long non-fiction books.

So, Breakthrough was absolutely perfect for me.  Fascinating medical history, civil rights (or lack thereof), well written and 101 pages (probably deliberate on the publisher's part, since some teachers insist a book be 100 pages to be 'worthy' of a book report. Yeah, don't get me started.)

But enough about me (hee hee, too late) let's talk about the book.  Breakthrough is about three doctors.  Nope, wait, two doctors and a research assistant.

It tells the story of Dr. Alfred Blalock, Dr. Helen Taussig and Vivien Thomas, Dr. Blalock's lab assistant and their radical new surgery to save the lives of 'blue babies'. These were babies born with a congenital heart defect, tetralogy of Fallot, that caused insufficient oxygen in the blood.  Since deoxygenated blood is blue and this color is seen where vessels are close to the surface (fingertips, etc.) babies with this defect were called "blue babies"

Dr. Blalock was an internationally famous physician, due to his groundbreaking work on the causes and treatment of shock (which took many lives on the battlefield) while at Vanderbilt and then Johns Hopkins University.

Vivien Thomas, an African American man, had wanted to go to medical school and had worked very hard to achieve that goal. He was accepted to Tennessee State College in 1929, but lost all his tuition money when the Depression hit and his bank closed its doors.

Dr. Helen Taussig was dyslexic (before that had a diagnosis or name) and a woman who wanted to become a doctor at a time when "only 5% of practicing doctors in the United States were women." Women were often denied admittance or even their degrees (after they had completed their studies).

Dr. Taussig did become a doctor and was actually asked to run the pediatric cardiac clinic at Johns Hopkins when it was created in 1930.

*We now interrupt this review for a brief political point:  It is fascinating to see how Dr. Taussig and her staff were perceived.  Even though she and Blalock did end up working together he said that she was "difficult"...Dr Taussig (and her entire staff)) come around here and worry me so much."  By "worry" he meant that she wanted to make sure her ideas were not "dismissed out of hand" and that her patients and their parents were treated well.  Wow, how dare she? (sarcasm emoji).*

Why is this a political point?  Well, watching the election coverage, I would say that women (one in particular) are still subjected to such an extreme double standard when it comes to behavior.  A male doctor's concern would not have been seen through such a condescending lens.

She saw her chance to try again when Dr. Blalock came to Johns Hopkins.  She met with Blalock and Thomas and they were receptive to her ideas (and surprised she had a "pleasant personality" sigh).  Thomas immediately started studying the collection of defective hearts that Taussig had (she was literally surrounded by her failures, making her more determined to find a cure) and coming up with ideas for an operation.

It is also fascinating (and aggravating) to note that although Thomas perfected the surgery, he was never allowed to operate on human patients (he practiced on dogs, and the book does talk about protests against animal experimentation), he would have to stand behind Blalock and advise him.

Breakthrough not only tells the story of a life changing/life saving medical procedure, it gives us a window into what it was like for women and people of color


Warning:  There is a photo in this book of two lynched African Americans dangling from a bridge.  It is horrifying and jarring and shows the heartlessness of the lynch mob.  They took souvenir photos which they often made into postcards.
Posted by Sharon at 9:55 AM 4 comments: